Historically, a president choking on a pretzel is nothing new. Indeed, if we are to believe leading authorities in the area, the pretzel was invented in 610 A.D., brought to the United States in the early 1800s by German immigrants, and since then Presidents Adams, Buchanan, Wilson, Johnson and Ford have all had a pretzel go down the wrong way. And the evidence is that Teddy Roosevelt did too, even though his tough guy image meant that he stood there with eyes watering, and then denied it until the day he died. 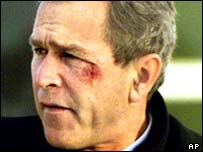 At 5.35pm on Sunday it was President George W Bush’s turn to have a run in with the saltiest, spikiest, oven baked snack of them all, and although it is still too soon to say how pretzel historians will record it, he has clearly broken new ground. For one, it appears he is the first president to actually pass out as a result of a pretzel, and failing that, he is certainly the first to have ever done so in wartime.

Excepting that the first casualty of war is truth, the facts seem to be as follows. Bush was watching an American football game in his bedroom, and to make up for months of having to speak very slowly and start most sentences with the words ‘make no mistake,’ he was letting off steam by gobbling his pretzels at pace. Mid-chew, one of these touched the vagus nerve at the back of his throat, which slowed the heart rate of an already slow man (I’m talking heart rate there) to the extent that he fainted. Bush came to quickly – he said he could tell because his dogs Barney and Spot were still in relatively the same position – and was unhurt, apart from a small bruise the size of a 50 cent piece (American, so don’t think 12 sided).

The White House public relations people have handled the situation well. The emphasis has been on the President, his almost too robust constitution, and the quick-fire response of the medical team. Bush himself has been jovial, and for a day at least has been allowed to talk at normal speed about folksy topics, like his mother and her lifelong warnings on the proper rate for pretzel consumption (for those interested, chew, chew, chew, swallow, breath, chew, chew second swallow). It’s all been a bit of fun, and for the first time in a while, nobody’s mentioned the war.

In caves and bomb shelters around Afghanistan, a different group of public relations people (let’s call them ‘demon propagandists’) have the job of providing the opposite spin. Without wanting to do their job for them, they have a few options, all of which should focus less on the superhuman pulse rate bit, and more on the Commander in Chief face down in carpet with half a bag of pretzels bit.

There will be much blessing of Allah, backslapping, and namedropping of brothers on the inside at the pretzel company. There will be discussions about American football as a symbol of decadence in the west, how a single team has 45 millionaires in shoulder pads sitting on the bench watching. As for the President himself, he will be painted as a man at the end of his tether, stressed and alone and on the verge of breakdown. A man struggling to negotiate snacks.

But to paint this picture, the demon propagandists will have to concoct a very different scenario. Remember as we understand it, it was 5.35 in the evening. The President had knocked off war council and was watching the Ravens game. Neither he, Barney or Spot looked like moving. If Al Qaeda rebels picture that luxurious couch: the gentle crunch of pretzels, the murmur of how many playoff yards Ravens running back Terry Allen has made in his career, the faint chatter of Laura Bush on the phone in the next room, they’re not going to think stressed President. They’re going to think lazy President. They’re going to think lucky President.

And so a story will be written, and it will exist alongside our story, and as months and years pass, there may even come a time when people wonder which is true. But then one day, possibly in a time when the Bush presidency is a distant memory, the great man will snack again, and he will snack badly. And then, the riddle will be solved. For pretzel history is ongoing and evolving.