This piece was commissioned by The Monthly and appeared in its October 2012 Arts issue. I have posted an earlier, longer version. Since writing this article, I’ve seen ‘The Sessions’ at a MIFF preview screening and it is magnificent.

Ben Lewin. In Melbourne for MIFF

Australian writer /director Ben Lewin was surfing the net, researching a sitcom idea about a person who trades his disabled parking sticker for sexual favours, when he read the article that changed his life. It was entitled ‘On Seeing a Sex Surrogate’ and was an autobiographical account of American poet Mark O’Brien’s decision to lose his virginity at the age of 36.

For the most part, O’Brien lived attached to an iron lung. A contractor of childhood polio, he was 140 centimetres tall and weighed just 27 kilograms. His entire body was paralysed, except for one muscle in his right foot, one in his neck and one in his jaw. For no more than four hours per day could he leave his iron lung, and became an odd but familiar sight on the streets of Berkeley, cruising the footpaths on an electrified, plastic-encased gurney. He steered using a mouth mechanism and mirrors, and even manoeuvred it onto stage to graduate from the School of Journalism.

In 1997, American documentary maker Jessica Yu won an Academy Award for her short film, ‘Breathing Lessons: The Life and Work of Mark O’Brien’. O’Brien died on the 4th of July, 1999, from bronchitis. He was 49.

It was late 2006 when Lewin bumped into O’Brien’s 1990 essay recounting his experiences with sex surrogate Cheryl Cohen Greene. Cohen Greene worked, and indeed still works, in Berkeley, consulting with clients suffering sexual dysfunction or anxiety. Over six sessions, Cohen Greene employs the “sensate focus” method of sensual touch and genital exploration, with verbal feedback, a technique developed in the 1960s by William Masters and Virginia Johnson. Usually, the sessions progress through lying together naked, to physical intimacy, to sexual intercourse. The surrogates are bound by a code of ethics and work in consultation with a referring psychoanalyst.

Lewin connected with the emotional and physical honesty of O’Brien’s account. ” It was quite immediate,” he remembers. “It really didn’t take a lot of thinking. I printed it out – showed it to my wife, as well as another friend, to get an idea of how big the story was, how far it reached. I got the feeling it did reach most people of in the area of fear of sex, which I think is universal.’

There was also something of a connection with respect to the shared condition of polio. Lewin also suffered a childhood case, and it’s meant he walks with callipers and himself stands just 155 centimetres. “Of course there is a commonality of experience. We both understood the impact on parents, what it’s like to feel different, what it’s like to feel isolated, and that yearning for closeness, intimacy. That desire to have a lover.”

But Lewin, who is now 65, doesn’t seek to overplay the link. ‘From a marketing angle, it adds some extra interest – that I had polio as well. It gives my take on the story that little bit more credibility.  But I didn’t have to struggle for independence in the same way Mark did. There’s a point at which there is a commonality of experience, and there’s a point of departure. In the end, this story grabbed me in the way that it seems to grab a lot people – it’s about an amazing man who lived an amazing life.’

It has certainly opened some doors in Hollywood, where the Australian has been writing and directing since 1994. By January of 2007, Lewin had optioned O’Brien’s story, and commenced work on the script. His wife, Judi Levine, jumped on as producer. By late 2009, a draft landed in the hands of Ronnie Yeskel, the woman who cast Pulp Fiction. “When Ronnie started sending the script around town, people sat up and listened’, Lewin recalls. By May of last year, the ex-barrister from Melbourne – best known for The Dunera Boys and A Matter of Convenience, and more recently for TV stints directing Seachange and Ally McBeal – found himself at the helm of a film starring Helen Hunt, John Hawkes and William H Macy.

In signing Hunt, Lewin had to convince the Oscar winner to spend a good chunk of the film naked. ‘Helen was very interested to know who the director of photography was,’ Lewin recalls. ‘Once she knew we had Geoff [Simpson], that satisfied many of her concerns. We also agreed that any shots she didn’t like of herself, when it came to nude scenes, they would come out.’

The first of these nude scenes was set at a Jewish ritual bathhouse. ‘Helen’s character had to immerse and convert to Judaism,’ Lewin says. As she dropped the towel, Rhea Perlman, immortalised as Carla from Cheers and playing the bathhouse attendant, broke out of character and said, ‘Wow, what a body!’ ‘Because it was Rhea, everyone cracked up laughing,’ Lewin remembers.  ‘And it gave Helen quite a bit of confidence’.

The shoot lasted four weeks and the director found it an unusually pleasurable experience. ‘I enjoyed making it … I rarely enjoy making a movie. Usually it’s hell, but this time the script was right, we had terrific actors and a first class cameraman. All I had to do was not screw it up.’

Still, Lewin and his wife weren’t exactly brimming with confidence. ‘It was the last roll of the dice for us’ reflects Judi Levine. ‘We had our dogs vaccinated; we were on the verge of coming back to Australia.’

The Surrogate (since retitled The Sessions) premiered at Sundance in front of an audience of 1300 people. From its ecstatic midst, Variety reporter Peter Debruge tweeted:  “Standing ovation after The Surrogate. If it were running in this year’s Oscar race, The Artist would be toast.” The New York Post said that it had ‘Oscar nomination written all over it’. The LA Times reported on a four way bidding war to distribute the film. The Surrogate won the Jury prize for Best Ensemble Acting Performance, and the Audience Award for Most Popular Film.

Fox Searchlight won the bidding war, and at 1am on that long, surreal day of the premiere, Lewin and Levine sat in the distributor’s Park City condominium, putting their names to a $6 million international deal that placed ‘The Surrogate’ firmly in the black, and Lewin as the hottest, youngest 65 year old director on the planet.

It’s a fairytale result for a man who has experienced the highs and lows of a Hollywood career. At one stage, he supplemented his income by selling antique watches, only to later direct a documentary, Hollywood Gold, about his misadventures in the Beverly Hills jewellery trade at Oscars time. ‘It’s fantastic to be able to pay investors back and give them a bit of money on top,’ he says, ‘but I’m not going to get carried away and retire. It’s probably not as lucrative for the director as most people would think.’

Nevertheless, on the night he became the talk of Sundance and his film was assured a worldwide release, Lewin does remember his last words to Judi before falling asleep. ‘You know what, darling? I think we can finally buy some new shoes for the children.’ 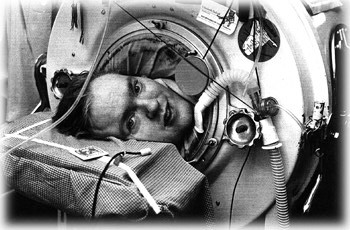