If you want to start barracking for the Germans, but don’t want anyone to know you’re doing it, here’s what to do. First throw out a smokescreen with an ‘Aussie, Aussie, Aussie, Oi, Oi, Oi.’ Really give it something and enjoy the complex synergy going on there between slang and grunt. Then, just as the green and gold flags come down, launch into it again, but this time substitute ‘Ossie’ for ‘Aussie’. Many people won’t notice, but watch out for the ‘Ossies’, a slang German term for people from the former East Germany). They’ll be going berserk. 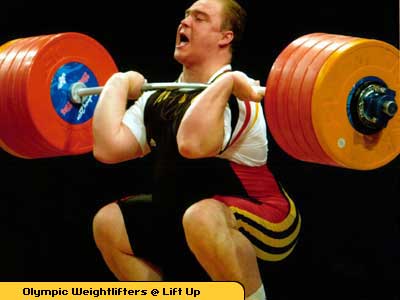 I learnt all this watching the superschwergewicht division of the weightlifting, summoning all my barracking energy and the entirety of my German vocabulary (which doesn’t really get beyond Eine Kleine Nacht Musik) to cheer three time Olympic medallist, Ronnie Weller. The motivation behind supporting Ronnie was simple. First of all, he had a physical presence that was worth supporting – 146kg of German austerity packed into a bodysuit that revealed every individual pie he’d eaten over the course of the last Olympiad. Secondly, if all went well, I planned to make a late and somewhat unworthy charge for a place in his entourage. For despite having never met Ronnie, I knew someone who knew someone who knew Peter Baxevanis, a retired Australian hammer thrower acting as a guide and translator the German weightlifters. And Peter said that if Ronnie won a medal, I could come out and eat pies and drink beer with him.

If you’ve never been to the weightlifting and seen men the size of small houses lift weights the size of slightly larger houses clean above their heads; I can heartily recommend it. For two hours we sat enthralled, loving the chalk, marveling as the steel bar bending like a licorice stick, as first the Iranian Rezazedeh and later Ronnie set world records. Then finally, in a result that confirmed Allah as somewhat of a weightlifting fan, Rezazedeh prevailed with a clean and jerk of 262.5 kilograms, almost double his own considerable body weight. But Ronnie came home with silver, a result which after bronze in Seoul, gold in Barcelona and silver in Atlanta, made him an immortal in his sport.

Later at the Deutches Haus, Ronnie Weller and I struggled with our small talk, he not even having heard ‘Eine Kleine Nacht Musik’. There was also the added problem of me knowing next to nothing about weightlifting. In fact, leaving aside my enduring respect for Dean Lukin’s weight loss program and Robbie Kabbas’ moustache, the only fact at my disposal was one gleaned during one of the most strained of all the Olympic bows drawn this year, Channel 9’s ‘The Animal Olympics’. That being that the greatest weightlifter on earth is the rhinoceros beetle, which can lift more than 100 times its own bodyweight.

But now, shaking hands with the newly crowned silver medallist, the subject of the greatest weightlifter on earth was a sensitive one, and I wasn’t game to bring it up. So I just offered congratulations and asked to touch his medal.

‘It’s pretty heavy isn’t it?’ I said which might have been a legitimate comment to a rhinoceros beetle, but was moronic in the context of a 146 kilogram man with a sequoia-styled neck.

‘Do you know that they accidentally put the Colosseum on this instead of the Parthenon?’ I offered, hoping a bit of a laugh at my countrymen might lighten the situation. Together we searched the medal but there was no largish ancient monument of any description to be found.

‘Oh, it must have been on the gold medal,’ I eventually had to concede.

For the next two hours, I regrouped at the bar and chatted to another weightlifting silver medallist, Marc Huster, who lost a gold medal last week because his body weight was 160 grams heavier than the winner’s. At one stage he lifted his beer glass up to my eye level and asked me to examine its liquid contents.

‘That’s about how much I lost a gold medal by,’ he said, tossing it down his neck.

I told him that he was a legend, and he signed an autograph for me. But he misheard me when I said my name, so I now have a coaster signed by a silver medallist, made out ‘Dear Togi’.

The undoubted highlight of the night came after the athletes left the ‘thank God we can finally have a civilised drink’ atmosphere of the Deutches Haus, and entered the ‘thank God we can finally start necking spirits from the bottle’ atmosphere of the bus to Darling Harbour. It was a forty minute journey, and to my mind, the performance by one Japanese athlete of sleeping the entire way must go down as one of the great Olympic performances of these Games.

The weightlifters, predominantly from the former East Germany, sang from the moment we departed the curb. First for Ronnie, then for Germany, then the ‘Ossie, Ossie, Ossie’ for East Germany. Then came mock serious performances of the old ‘patriotic’ songs taught to them as part of the USSR propaganda machine, and then hilarious giggling through the USSR anthem itself.

‘We hated singing them when we learned them, but now we find them funny,’ Marc Fuster explained.

I told him that it was probably pretty similar to how many of us feel about the Collingwood football club song, and then took the bus through a couple of bars. Then we did the Richmond theme, then the old Fitzroy one, because like a fool I forgot about France and their national anthem and the 2-0 scoreline in the last couple of world wars.

We disembarked at Darling Harbour, and without an athletes pass, I missed out on getting into any of the few nightclubs that remained open. The weightlifters tried hard to convince one group of bouncers that I was a mute German table tennis player (‘tish tennis, tish tennis’) but it was to no avail. In any event, it was four o’clock in the morning, I’d been hanging out with some of the great meat-axes on the planet, and I’d even managed to touch an Olympic medal. I spent the next half hour walking to the train station, wondering if at 27 years of age, with a booming career in E-grade Australian rules football, it was time to concede that this would be my closest ever contact with a medal.

Not yet, I eventually decided. If I don’t make Athens though, I’m definitely gone.