Obviously, part of the reason for this is tha 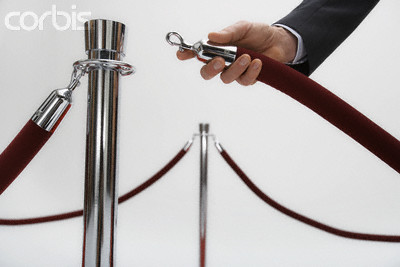 t very few primary school kids have an idea of what goes on at nightclubs. Careers guidance probably has something to do with it too. If little Jenny can muster up something that half resembles a pirouette, it doesn’t matter if she comes from a family of discus throwers, parents and teachers will encourage her to become a ballerina. But if she’s carving herself out a niche as a mean-spirited, superficial little cow, capable of ostracising half the fifth grade for wearing the wrong shade of denim, nobody quietly taps her on the shoulder and says, ‘Tell you what Jenny, you might just cut it as a door bitch’.

It stands to reason, then, that there are very few women fulfilling life-long dreams when they become door bitches, and frankly, it shows. No smiles. No enthusiasm. The name of the game is to stare blankly out into the crowd as it nervously attaches itself to a red nylon rope. Maybe I’ll see your 1983 desert boots. Maybe I won’t. Maybe I’ll turn a blind eye to your third degree acne. Maybe I won’t.

The only thing for certain is that each individual in that queue will have a good half hour to think carefully about the aesthetic contribution he or she is making to the world, and whether it should be rewarded with entry. Unless you’re a Member, of course. If you’re a Member, the queue is your oyster, the door bitch your butler.

With bouncers it’s a bit different. Traditionally, while the door bitch exercises power over right of entry, her male counterparts hover in the background, their realm being power over who lives and who dies. You can tell them by their black T-shirts and numbered security tags. You can tell them by their shaved heads – intimidating, shiny, easy to stitch. And you can tell if they’ve grown tired of hovering in the background by whether you’re horizontal, holding three teeth in your hand and whimpering softly to yourself: ‘Number 112 did it. Number 112 did it.’

There is some middle ground between life and death, and the unit of measure is teeth.

For ten years I have accepted this as the natural order of the night club queue and have not asked any questions. Actually, that’s not exactly true. I once asked a bouncer why it was that when five people left the premises, five people waiting in the queue couldn’t go in.

‘Security mate,’ the bouncer had said.

I’d then repeated my question, explaining as reasonably and as good naturedly as I could, that once the five people left, the queue could surely expect to progress into five-people-worth of space. I appealed to logic. I appealed to good sense. I did not appeal to Number 51 with the handlebars moustache.

That was all he’d said. Then he just stared at me with his terrifying scorching eyes – the eyes of a man who liked chats recalling his five times table to be brief and seldom.

The message was clear. There was a sacred order to the night club queue that could not be disturbed. Door bitches would wear Spandex and scowls; bouncers would be accorded space and respect. If you disturbed the order, the order would disturb you back.

Which is why somebody has to explain to me about the Chuppa Chupps. Two weeks ago, in the queue outside the Builder’s Arms Hotel in Fitzroy, somebody in security dress was handing out Chuppa Chupps. ‘Sorry about the wait, sir. Very busy night. Have yourself a Chuppa Chupp’. Soon everyone was standing there with lollypop straws dancing in their mouths, whispering excitedly to one another about the miracle of the Chuppa Chupps. What was going on? Was this a trick? Would the bouncers tire of our Chuppa Chupping ways, and remind us once and for all that ‘glass’ can also be used as a verb?

But it was not a trick, any more than the miracle of the jubes the following week was a trick. This time the setting was the Great Britain Hotel in Richmond. It had seemed like a standard queue, no better or worse than any other, just there doing it’s queuely duty of standing still, shuffling forward when told, and making the place look popular.

Yet this queue was different, for the simple fact that the door bitch was different. She was the Florence Nightingale of door bitches – beautiful and caring – and as the minutes stretched into tens of minutes, she serenely walked the queue, offering the masses jubes from a converted make-up bag.

‘We’re sorry about the wait,’ she said. ‘Would you like a jube.’

As it happened I didn’t want a jube, any more than I’d wanted a Chuppa Chupp, but I wasn’t about to say so. For the first time, it appeared significant steps were being taken in the fight for queue peace, and if that meant I’d have to pick unbearable, grape flavoured confectionary out of my teeth all night, it was a price worth paying.

After all, a jube is certainly better than a punch in the face, particularly from the point of view of the punched.